I pulled a fast one on my brother. And, I gotta tell you, the plan and implementation was flawless!

Many moons ago, Tom was in a band. He had dreams of being a rock star. His band, Asylum, had some really good local success. But, no matter how hard they tried, they could never get over the hump. That’s OK though. They worked hard. They tried hard. They have no regets.

While in the band, Tom also taught guitar at the local guitar shop. He has taught countless of kids how to play guitar. And, like any teacher, Tom remembers one of his best students — Evan.

So much so that he followed Evan’s rise in a great band based in DC called Honor By August. Check them out here. You won’t be disappointed.

Tom keeps bugging me and bugging me to give this band a listen. Finally, I did. And now I can’t get enough. They are that good. And they are on their way. No question in my mind.

Then we find out the band is playing in Connecticut. So, we trek 90 minutes to go see them on a cold February night. They were awesome. I was hooked even more.

Fast forward to the point where I learn that Evan grew up right across the river from where I work. And, that his Dad has been active in my place of employment for more than 20 years. A small world keeps getting smaller.

So, while seeing the band for the first time, I mention to Evan that I want to bring them to where I work for an outdoor summer concert. He’s completely jazzed about the idea. And, turns out the band spends time near here every summer anyway to write songs. Things are just working out here for all the right reasons.

Meanwhile, I’m striking up a relationship with Evan as we discuss the show. Then, they come back to the same place I saw them the first time — now a month away from the show at my place.

Tom and I (along with his wife) go to the show and have a great time. The band rocks. And, they are excited about playing our show.

As we’re leaving for the night, I hang back for a bit and say to Evan, “Think you can teach the band an Asylum song?”

See, each show Tom is at, the band dedicates a song to him and mentions that he taught Evan how to play.

The plan was in place and things were coming together. I managed to get an mp3 file of an old song from Tom and get to Evan. The next challenge was getting Tom’s guitar there so he could play his own. Evan even referred to it as the “great white beauty” because he had fond memories of it as Tom would use that one to teach.

On the day of the show, Tom arrives early to hang with me and the band as they set up — chatting with Evan and catching up even more as only teacher and student good do.

Meanwhile, Tom’s wife was bringing his guitar to my work and leaving it in my car — but inside another case that I had borrowed from a co-worker who was in on it. This way, the guitar could get to the venue without Tom being suspicious because he wouldn’t see his own case. With the help of my wife and two super fans of the band, that was easily done.

Evan and the guys were psyched to pull this off. And I mean they were genuinely excited to be a part of it. And that’s what made this even better. I had said to Evan that Tom feels like he had a little something to do with Evan’s success.

So as the band starts the show, the ‘great white beauty’ was resting on the side of the stage — waiting for Tom to come up and play.

And then it happened, the singer, Michael, announced that there was a special guest here to play with them tonight. Tom had no idea until Michael said, “Tommy O (that’s what Evan always calls him), come on up, we’ve got a surprise for you.”

This was perfect! As he got on stage, Evan opened the case and Tom saw his guitar. He had no clue that we got the guitar there! So, he straps it on, plugged in to Evan’s rig and away he went.

What a moment to see teacher and student playing together.

More importantly, for me, what a moment to give my brother. We don’t talk a lot about stuff. We just don’t. We know how each other feels, and that’s enough.

Except on this night.

Tommy O deserved to be on that stage. He deserved the chance to play again for an audience. And he didn’t disappoint. The place loved the whole surprise element, and he played most of the song with a smile on his face — especially at the end of the song when the band bowed down in playful — yet meaningful — respect. And many of the people at the show gave him a standing O. It was a great moment.

I met him backstage and he was psyched and very thankful to me for pulling it off. Over the next couple of hours, he learned the entire back story (as you just have) and we shared a lot of great memories about it with the band.

He was all concerned about how it sounded (fabulous, by the way). And it didn’t even matter.

The fact is, Tom got to play. And he loved it.

Evan got to play with his mentor. And he loved it.

And I got to do something incredible for my brother.

Because I love him. 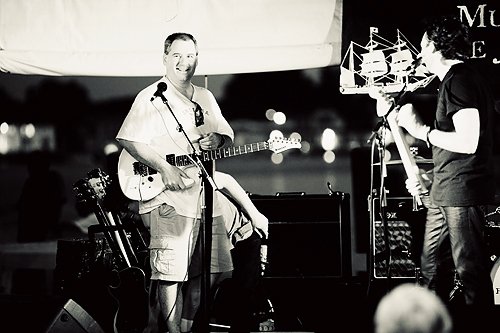 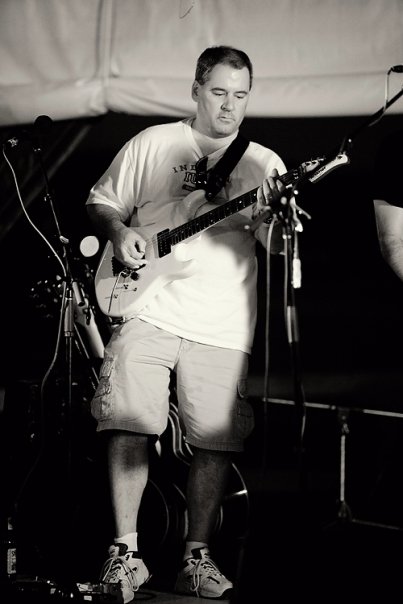 Teacher and student together. 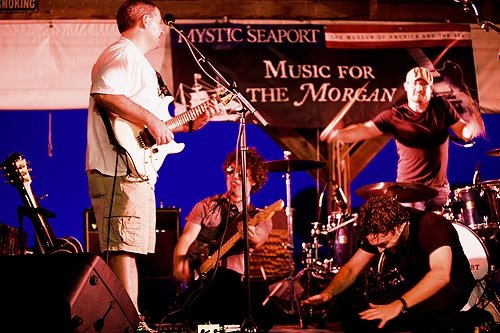 The smile that made it all worth while.