Well, if the headline doesn’t give it away, maybe these pictures will. 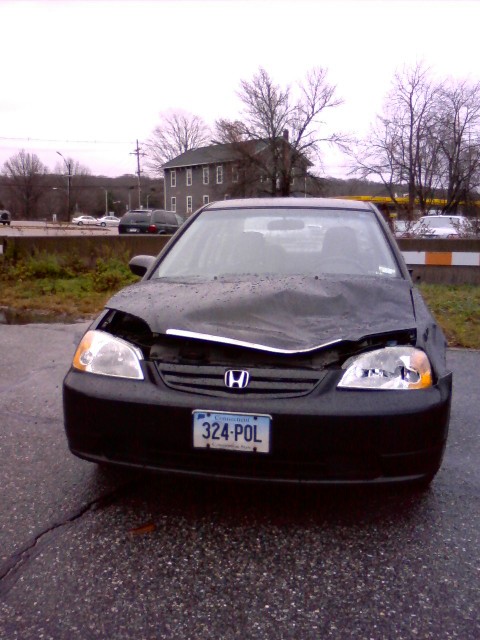 Say hello to my Honda Civic. You’ll notice by now that a deer did the same thing.

Except that when Bambi said Hi to my car Friday night, I happened to be driving it about 70 mph at the time.

Not a bad start to the weekend, eh?

Also good news. Nobody else in the car with me.

I was on my way home for the start of what was going to be (and what turned out to be) a great weekend. Elton John was playing Friday night at a nearby venue and I managed to score a ticket earlier in the day, thanks to a dear (um, no pun intended) friend.

So, on my way home, Elton on the iPod and just cruising along the highway.

Whatever the case, all he did was find me doing about 70.

It happened so fast. I never breaked. Never swerved. Never did anything except run into it.

I started to pull over, mostly to make sure I was fine and settled down. The highway was busy. Not a lot of room in the breakdown lane, so I really didn’t want to get out.

Nothing I could do there anyway. I could tell the hood was pushed up, but I could see fine. I wasn’t injured. Heck, my iPod didn’t even slide off the passenger seat. (And, if you’re wondering, I don’t wear the earphones. I plug mine in through the stereo. There was no safety issue. And, no, I wasn’t on the phone either.)

The car was moving. I was fine. And, I was less than 10 minutes from home, so I just made the decision to keep going — partly out of fear that if I did stop, something would happen to the car and then I’d have to call Renee to come get me. So, away I went.

I called Carrie. She was the one that I got the ticket to the show from.

“Um, I should be at the concert, but if not, it’s because I just hit a deer.”

You know, don’t all conversations start that way?

Then, I was home — right at dinner time — so, you know, no better time to bring up that I was just in an incident involving a deer.

I should also mention that this is the second Bambi I’ve encountered in my life. The other was when we lived in Vermont. And that’s actually a very funny story. Maybe someday you’ll be lucky enough to hear it.

So there’s Renee, putting the kids’ food on the table.

How was your day?

I just hit a deer.

I just hit a deer.

And the routine became the routine. And that was a good thing. Needed the normalcy there for a minute. While I was fine and all, it was still a somewhat hair-raising moment. Got settled down after a good dinner and made mental notes about who to call.

After dinner and assurance that I was OK, it was bedtime for the kids and then Elton time for me.

Took Renee’s car to the venue and walked in just in time to sit down, have a beer, meet some great people and enjoy the master sitting at the piano.

It was the third time I’ve seen Elton, and, honestly, probably the best time. He was stellar. And, if you’re a fan, he hinted that he and Billy Joel will be back out on the road together next year.

So then Saturday morning, I start the calls. Insurance. Claims. Rental. Ugh. Hate this. But, it’s just a car. I’m OK, the kids are OK. Renee’s OK. It’s the car that’s hurt.

It’s going to be a pain in the ass, but we can do this. Deep breath.

Get the car to the body shop. Clean it out. Move car seats. Oh. The. Joy.

But, here we are. Ready to go. Ready to get on these people starting Monday morning. Get your ass there, adjustor. Let the body shop start on this sooner than later.

And, let my baby (um, that’s the Civic) be OK. The damage actually doesn’t look too bad, but have no idea what it’s like underneath. Because, I can tell you this, going straight was no problem. Turning was a bit of a challenge.

So, that’s the start of my weekend. How did yours start?! Doubt it was as much fun as mine.

Thank goodness for Elton. He made it all better.