Aidan Provides Yet Even More Material

So, some background to make these upcoming Aidanisms as funny for you (hopefully) as they are for Renee and me.

Aidan loves bananas. He often has one for breakfast. Sometimes, we slice the banana for him in the shape of a little disk.

It’s communion time at church. Renee is carrying Erin. Aidan is walking in front of me. He stands there between the priest and I as the priest puts the host in my hand. I take it and put it in my mouth and start to walk away, with Aidan, back to our seat.

“Daddddd,” he says, as we are walking down the aisle. “What did you get? Is that a slice of banana?”

We have an abundance of chipmunks in our yard. Aidan calls any of them “Charlie Chipmunk.” One day, poor old Charlie had gone to the great big chipmunk land in the sky. Aidan was aware of what happened. (Honest, this is important.)

The other morning, we had a rabbit just off our driveway. He must have been hit by a car and then somehow got into our yard. He couldn’t move. Before we could do anything, the crows made him breakfast. Again, Aidan well aware of what happened. We dubbed the rabbit, of course, Roger.

Every time we go to church, Aidan helps me light two candles and say a short prayer for my grandmother, father and brother.

So, mass has ended, and Aidan and I are up front at the church, getting ready to light candles. He chooses blue first, and we light that one for my grandmother.

Then, we walk across the front of the church to the red candles.

And sometimes I wonder if he gets it.

But, back to the topic at hand.

This little Facebook thing is pretty incredible. Prior to this, I had registered for both Facebook and My Space but hadn’t done anything with either. Now I would have to say I have close to a full on addiction to the ‘book.

How this little thing works is nuts. I know someone who knows someone that I might know. Boom, we’re friends. I’ve already connected with a couple of friends I haven’t talked to in a few years. All because of the ‘book.

And, there’s someone I know professionally who found me and I’m not even sure I know how she found me. But still cool. Very cool.

I can’t get in — at least not yet — to all the added components and applications you can do. I mean, I’m still trying to be a semi fulltime blogger — how am I going to find time to do all the other stuff the ‘book can do? It’s crazy, this 21st century tech stuff. Crazy I tell you.

I mean, Tortious sent me some flair the other day. I don’t even know what that means. I’m assuming it’s all good, because, let’s face it, my blog crush isn’t going to steer me wrong. Right?

A few of loyal readers have already ‘friended’ me and I thank you for that. Cool to be connected to some great people in another way.

What’s next you ask? Beats the hell out of me.

Not quite sure I’m ready for this Twitter thing.

Nope. Not kidding. The little counter tells me how many. And it says today is 200. So who am I to argue?

Thanks to Molly for getting me into this blogging thing nearly two years ago — which means there’s another milestone coming up in August. I remember the day in the office when she tried to convince me to do it. Well, now I’m pretty much hooked.

So I was thinking of a cool way to mark the 200th post. I mean, it’s gotta be something fancy, right?

I had intentions of doing something that I might still actually do. It’s just going to take some time to do it. And, I would have had that time, had I not discovered my recent addiction to Facebook — thanks to pals Anna and Tortious.

So, in lieu of that, it seems appropriate to mark the occasion of the 200th post with an Aidanism. And the timing couldn’t be better as this one just happened this morning.

So we’re getting things ready for breakfast, which means Renee is busy in the kitchen, I’m trying to stay out of her way, Erin is in the high chair and Aidan is running around like a mad man.

He goes up to the high chair and really gets in Erin’s face to make some goofy sounds and expressions.

Erin, showing her moxie, doesn’t like her space invaded so she takes her hand and bops him on the head.

He responds, “I think that’s her way of loving me.”

Can’t make this stuff up.

No, wait. I do have something. Thanks to the faithful who have stuck with me from the beginning, and thanks to the newcomers who have discovered me along the way.

A Look at the Weekend — Literally 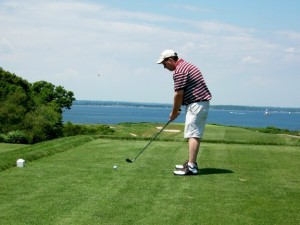 So I haven’t played golf in three years. So, what the heck, why not get back into the swing of things (no pun intended, honest) at one of the top-rated courses in the country? I mean, how bad could it be? Well, apparently, it could be bad. Very bad. But look where I was. Goodness. Oh, and it’s a private course. Thanks to Matt and another friend, I was able to get on and take my regular golfing father-in-law for an amazing time. 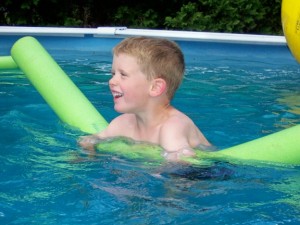 There was time in Mimi and Papa’s pool for Aidan the fish — still a way to go, but what a difference a year makes!

Of course, Auntie Steph had all she could do to hold Erin back. She eventually did make it in. And talk about a little fish! 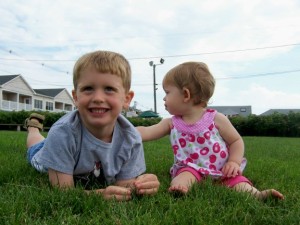 There was almost this great shot of the two of them in Watch Hill. 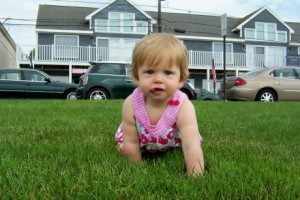 Look out, Daddy, I’m coming to get you! 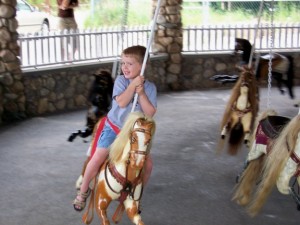 And, of course, Watch Hill means the best carousel around! 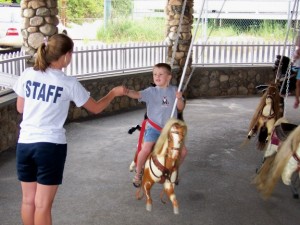 And the carousel means reaching for the golden ring (which wins you a free ride).

And then she loved her first feel of sand between her toes.

And, well, I love these three — more than anything.

It’s been a while since I’ve blessed you with some great words of wisdom from Aidan, who now rocks on as a four-year-old.

So the other day, we stop for ice cream. He orders raspberry chip. He’s licking away at his cone, almost mastering the lick technique of keeping it smooth and drip free, when he stops, ponders and says, “Mom. Dad. Raspberries aren’t purple.”

Of course he knows what color they are, but how do you tell a four-year-old that purple and sometimes blue are the preferred raspberry colors? I guess I have to understand it first.

My favorite came the other night at dinner. We were having breakfast for dinner and Renee made this great big ‘ol omelette sort of a thing. Aidan’s not much for eggs (yet), but he was interested in trying them — so this was cause for an internal victory, regardless of what the results were.

So,  he’s got a hunk of egg on his fork, but he’s only nibbling away on it.

“Daddy,” he said, “I’m taking little bites because I’m just getting used to it.”

It completely cracked me up.

But, at least he tried them!

Oh, except I was at the Celtics/Lakers game last night!!!

I gotta tell you, I’m sick of writing these letters. It’s hard enough to write one to Dad every year, let alone write one to you. I mean, let’s be honest, when I started this blog, I really had no intention of using it as a vehicle to write letters to my family members who had passed away.

We had a tough day yesterday, Tim. It was Father’s Day, and Tom had a graduation party for Ryan. Sue and Brendan have been having a tough time this week, and I know today won’t be easier for any of us. I was able to get Brendan’s mind off things for a little bit, though. I took him to see Billy Joel last night. He loved it. He was so excited to hear Piano Man, and when Billy played it, I couldn’t help but look at Brendan when Billy sang, “…cause I know that it’s me they’ve been coming to see, to forget about life for a while.”

I wish you could meet your niece, Tim. Erin is our little angel, bringing us so much joy last year — particularly because you went and died within a week of  her birth. Damn you! Seeing the way you played with Lauren, I know you would love playing with Erin, Tim. She loves peek-a-boo! And one day, I’m going to tell her all about her Uncle Tim.

A lot of people are going to be thinking about you today, big brother. You touched so many. I’m sure the folks at your work are having a tough day, just like the rest of us. It’s been eight years since Dad died, and it still doesn’t get any easier.

I told you already that I hate writing these letters. Today is no different. Writing this does do one thing, though — it connects me with you. And I’ll do anything that connects us again. So until I join you one day (which is hopefully a long, long, long way away), this is the best we’ve got.

I promised five posts this week.

This is the fourth.

I’ve let you down.

OK, now that I’m done with that, let’s move on, shall we?

If it’s Friday, it means randomness for you, which means lack of ideas from me.

Had a classic lunch with the aforementioned work wife yesterday. It’s part one of our barnstorming two-lunch goodbye. We went to Wendy’s (I had a salad!) where they continue to mess with a good thing, i.e. the Frosty. Not only is there the basic Frosty (which is chocolate and only chocolate), but there is now a vanilla Frosty, Frosty shakes (including strawberry) and Frosty twists, which is there version of the Dairy Queen Blizzard. We tried one fo the twists — chocolate and M&Ms. Note to Wendy’s: stop messing with a good thing.

My friend that went into rehab gets out tomorrow from his 21-day treatment. I haven’t talked to him, but reports are that he’s doing very well. I hope so. And, honestly, I’m having a hard time with this still and will be curious to see how are first few conversations go.

Renee gets out of school for the summer on Monday. I was always bust on teachers working “half the year.” But always in a good way. Nobody works harder than Renee. The prep and correction time is crazy. She’s looking forward to the summer off. She deserves it.

Emotions all over this week. A year ago I was trying to find a way to celebrate the birth of my daughter while trying to deal with the impending death of my brother — all in a week. Monday is the anniversary of his death. Sunday, we’re having a family gathering for one of my nephews who graduated high school. We’ll all be together. Probably won’t be many words said, but they won’t have to be.

I’m also going to see Billy Joel again Sunday with two friends (yes, females) from college. There were supposed to be four of us, but there’s three. That means there’s an extra ticket. Anyone wanna go?

Oh, and Sunday is also Father’s Day….bittersweet for a lot of reasons. But, my goodness, am I the luckiest dad in the world, or what?

I Got Nothin'
Blog at WordPress.com.