The Hardest Thing I’ve Ever Done?

I gave a eulogy at my dad’s funeral.

And at my brother’s.

And at my grandmother’s.

I held my wife’s hand during a procedure no woman should go through once, let alone twice.

Yet, last week, I may have done one of the hardest things I’ve ever done.

I walked away from a friend.

When I first knew him, there was no question he enjoyed a drink. Heck, we were young. We all enjoyed a drink. He had alcoholism in his family, but I never thought it would get to where it is today. Maybe I’m naive. And if I am, so be it. But even if he did drink more back then, nobody could be prepared for what is happening now.

It’s hard for me to even tell the story. But I have to. It’s consumed so much of me in the last few months that I need this outlet. Again, this is for me. Not for you.

I knew about a year ago that my friend was struggling. But I also knew he was strong. He could stay in control. Or so I thought. We talked regularly. Emailed regularly. Saw each other a few times. Only on one of those occasions did I start to seriously suspect a problem. A problem which had been going on, apparently, for almost a year. He just hid it from those closest to him well.

The lies were becoming more regular, as well as the defiance. He had it under control. He could handle it his way. He could just get to a point where he’d sober up and then be able to enjoy a drink now and then.

In the last 50 days, he’s been in and out of detox twice — each time getting cleaned up yet refusing to go to a long-term treatment facility. And each time, lasting barely a week or two before falling. Again.

Just as two friends and I were planning an intervention, the call came. My friend was in a car accident. In fact, he was the cause of a five-car pile up because he couldn’t tell the other four cars were stopped at a light. He was in a town he doesn’t know why he was in. Oh, and it was at 9:30 — a.m.

Thankfully, nobody was seriously hurt. But maybe this would be the wake up call that he needed. If only that were true.

My friend got DUI, and I found out that he beat one a few months earlier by talking his way out of it.

I went to his house with another friend and we convinced him he had to go to the ER – which was mostly a ploy to buy more time to convince him to stay in the hospital and detox before going to the long-term facility.

It almost worked. But he refused to go back to detox. They don’t know what they are doing, he told me. I can do this on my own, Mike. Just give me the chance. I can do this my way.

I told him that his way already failed — twice. It was time. Again, refusal.

After I took him home from the hospital, he actually had the nerve to ask me to drive him to the liquor store. “You know I’m going,” he said. “Why not just bring me and save me the walk?”

I didn’t even know how to respond, but I found these words.

And it literally is killing him. His liver is damaged. He’s not creating platelets. He’s a mess. He’s a shell of what he used to be.

This is a disease. I have no doubt about that. It has taken one of the smartest people I know and just broken him. Completely broken him.

And the problem is, it’s breaking all those around him who love him. Yet he doesn’t see that. All he sees is a need. A need for alcohol.

I’ve lost sleep over this. I haven’t been able to concentrate on things because of this. I’ve spent so much time on the phone and written so many emails. None of it has worked. None of it. I’m actually debating about going to an Al-Anon meeting. I never thought that could be possible, but I’m thinking about it. But that’s where my mind goes when I think about my friend being dead by the time he’s 40 — which is a possibility if he keeps going at the pace he’s on. I think of reunions he won’t be at, if that’s the case. I think of all the common ground we share and now know that we may never share that again — either because this disease beats him, or, worse, he lets it beat him.

When I was with him at the hospital the other day, I said the following. I couldn’t stop myself from saying it, not after seeing him physically beaten up and mentally beaten up, yet still convinced he was in control:

“Friend, I love you like a brother. You may think everything is fine. It’s not. It hasn’t been. You were drunk at my brother’s wake. You’ve lied to me and to others. You’ve admitted that this has beaten you, yet you won’t fight back. At all. You’ve always been a man of your word, and you said you’d go in long term if your way didn’t work. Well, it hasn’t worked twice, so now’s the time to step up. To get cleaned up and to get in for long term help. And that’s the biggest point, friend, not once have you asked for help. And until you do, until you call me from either detox or the long term facility or until you call me and tell me you need help getting to either of those places, then I’m done. I can’t do this anymore. It’s affecting me in a way I never would have thought. And I can’t do that any more. Not to myself. I’ve spoken at too many funerals, friend. I don’t want to speak at another one any time soon. Call me when you’re ready to ask for help, otherwise, good luck.”

And with that, I walked out the door.

I have the desire to help him. But he doesn’t want help. The only thing he wants is a drink.

The Weekend in Pictures 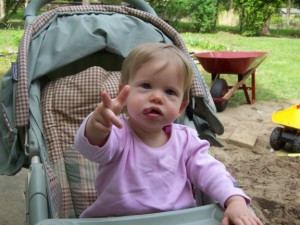 There was a pretty girl pointing.

There was a birthday boy in his sand box and sand pit (where our shed once stood). 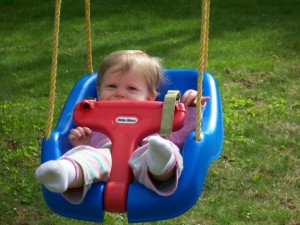 There was a pretty girl swinging with a peek-a-boo smile. 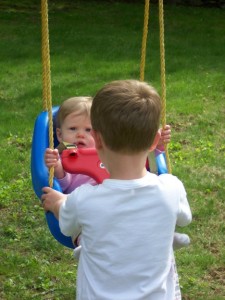 And there was my favorite picture of the weekend.

Aidan resting after his first bath.

We were never going to have kids. That was pretty clear once Renee and I were married. We’d be the best aunt and uncle ever. But actually having kids? No thanks. We just didn’t have time for that.

Something changed. I’m not exactly sure what or when. But thank God it did.

And four years ago today, Aidan Michael blessed us with his presence — as he continues to do every day.

As he gets older, he does a lot of things — including testing our patience on a regular basis. However, those moments are nothing compared to the joy this child has brought — and continues to bring.

It wasn’t easy for us to get pregnant and, well, stay pregnant. That’s what made Aidan’s arrival so emotional. He truly blessed us upon his arrival. He made us realize that we can love in a way we never knew.

He is the perfect blend of, well, us. He is Renee’s son. He is my son. And hopefully, one day, those traits will actually help him along in life. 🙂

He’s bright. He’s smart. He’s funny. He doesn’t forget a thing. He’s all little boy — trucks and dirt are two of his favorite things. Yet today he asked me if our neighbor “was going to cut any more of those beautiful flowers for us.”

He’s brought so much joy in four years. It has been amazing to watch him grow and learn.

We’ll celebrate today with a trip to the doughnut shop for a sprinkle doughnut,  his favorite. And tonight we’ll follow up dinner at McDonald’s with cupcakes. His real party is Saturday, at which point our little boy is getting a two-wheeler with training wheels!

In reality, though, we celebrate Aidan every day.

We were never going to have kids.

But thank God we did.

Mom and I love you more than you’ll know. 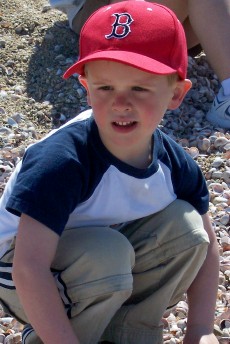 Lots to share with you about Aidan…and that will come.

But, as he approaches his fourth birthday — this Thursday — the kid is growing like a weed. So, we went shopping on Saturday to get him a bunch of new shirts. Don’t need shorts for the summer, thanks to my friend Hallie who has three boys older than Aidan and graciously passed some along.

So, one of the shirts, which he’s wearing today is green (his favorite color) and it features a train on the front with the number 17, which has a little glitter on it. His favorite color and one of his favorite things (the train), so this shirt is probably going to be in heavy rotation.

So we’re driving today and he’s yapping away about this, that and the other thing. And then the following comes out of his mouth:

“There’s a little glitter on my shirt.”

There have been some bumps in the road lately, but when something like this comes, it’s just the best.